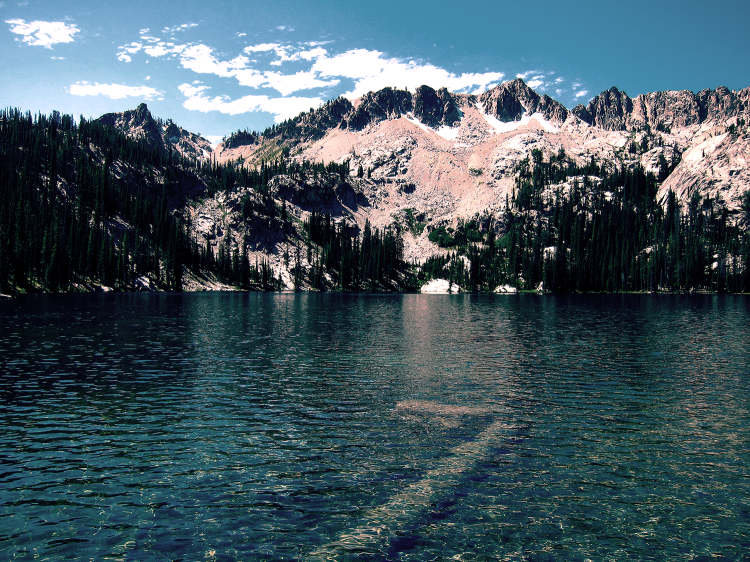 Sunlight glared off the only boat in the mountain lake. A few yards away was the island that might have saved the passengers, maybe even the captain if they were especially quick and steel-nerved. As it was, the boaters who’d been brash enough to dare the water thirty minutes ago huddled on deck, unable to even glance at the choppy surface.

On the sandy banks, a crowd had gathered.

Boats rocked in their mooring at the marina, but nobody approached. The boaters, a mix of natives inured to the lake and tourists hypnotized by their frozen concern, murmured amongst themselves, shielded their eyes to get a good look at the single boat. Angry waves slapped at its hull, but like a pin in a board, it stayed still. A long plume of black smoke came up from the engines. The captain continued spinning the wheel in spite of it. The passengers could only just be seen.

“We could go out and get them, it’d only take a couple of minutes,” one of the tourists mumbled, eyes fixed on the glinting steel.

Nobody moved toward the boats.

One of the passengers, a middle-aged man who’d been looking to fish a big one from the frigid alpine waters, got to his feet. From the shore, the crowd heard him screaming. Angry screams, the desperate kind that edges over fear and helps the screamer forget they were ever afraid. A man’s scream for certain. The locals knew the first to snap tended to be the woodsman type, the sport fisherman type.

There was mercy in that. The lingering of the women tore at the heart like the quick explosion of men didn’t. It was hard to feel guilty when the victim jumped into the water himself. In all the years anyone had been keeping more than the loosest of track, only a few women had jumped ship themselves. Mostly, they were dragged. The jumpers, so the locals held, got what they deserved. The dragged…

At a certain point in time, they all became the dragged, didn’t they?

The screaming man climbed up on the railing. Tourists, seized by the same impulse that held them hypnotized on the shore, started screaming back.

If he could hear them, rage carried him further than reason. The mean dived into the water, sending up a great splash. The water settled. After a moment, his hat, which must have come off on impact, sank after the rest of him.

“God, somebody has to do something,” one of the tourists sighed, unable to pack half their outrage into the sound.

“You want to go out and get between those depths and a boat?” a local asked.

A high-pitched, lilting sort of scream came over the water, nearly drowned out by the wind and water. Sobbing. One of the other passengers. At this distance, it was impossible to tell whether it was a man or a woman. After a second, the waves sucked up the sound, and there was only the whispering hint of it that could slide out between the crests.

Next to the marina, a sign read ‘no engine boats.’ In the office nearby were its other placards: ‘free to boat,’ ‘no boating,’ ‘no fishing,’ ‘no swimming.’ At this point, all applied. The lake operated on a strict one-strike policy.

Half a mile of surface distance and depths the likes of which even tourists knew to fear sloshed hungrily between the crowd and the dead ship. When the lake was in this state, anyone up above their knees would join the ranks of ‘the dragged.’ Better then to stare. To count the exact second the sunlight stopped glaring off of steel and paint, and the lake returned to contented welcoming.

After a few minutes of hopeless searching for a hint of the boat, one of the locals went out up to his chest. The crowd held their breath.

He came back, grim-faced, and went to the office. Under the eager, terrified vigil of the crowd, he brought out the new placard and affixed it to the sign.

Some amongst the crowd cheered, and went to their boats at once. Already, the fear, the pity, had been dragged from them, pulled by the lake’s ferocious currents down to the bottom. The locals, inured to the lake, could only sigh and clutch over their hearts. The lake was a hungry chasm, a stomach with depths to match any mountain not covered in water. But a merciful creature, in its way, to drag away the guilt and the fear, and let people gather at its shores again and again.