Maybe it’s a hold-over from when my primary occupation was ‘artist,’ but I obsessively search for face models for all of my characters. It used to be so the features I drew were more varied and grounded in reality. Now… I suppose it helps with visualization, though more often than not I think in sentences and phrases these days, instead of images. Whatever the reason, I still do it.

Gavin and Cho, the protagonists(??????) of Orchid Mantis, are no exception. In Gavin’s case, a particular actor inspired the look of the character, but for Cho, she was fully realized before I ever found a model to match her.

There is the VERY PICTURE that inspired the big boy, though physically he also owes a lot to Hafthor Bjornsson, the huge strongman that plays huge monster Gregor Clegane in Game of Thrones. The lucky(??????) model for Gav’s face is Greek actor Yorgos Seitaridis, who is near impossible to get pictures of, let me tell you what; almost none of the resources or sites I combed through looking for more pictures of him were in English. And lots of them are him without a beard, though the beard is very important to Gav’s image as a very masculine, intimidating guy.

I’d like to say Gav would never poke a man’s eyes out with his thumbs and squish his head in front of a screaming crowd, but the job of the author is to push their characters to their limits and who knows the depths of the violence that lurks in his soul? Well, like, I do, but he doesn’t, authorial authority being what it is. Either way, the Hafthor Bjornsson on the right is far closer to Gav at his base state. Smiling, being politely affectionate to women, and wearing basketball shorts because he is so large. Ever notice how almost all super beefy dudes have widow’s peaks and receding hairlines? What’s up with that? Testosterone or something? I could Google it but the mystery is part of the allure to me.

Cho, on the other hand, is at once more specific and more generic, if that makes sense? Almost any cute Korean girl posing with fried chicken is pretty close, but none of them are quite right. To me, a certain otherworldliness, an intensity, is very important to Cho. And it’s also very important to me that she not have big eyes or a double eyelid.

And that is why I love Korean model Sora Choi, a very beautiful woman with a very striking image. 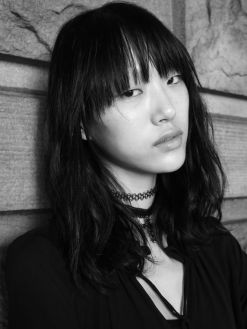 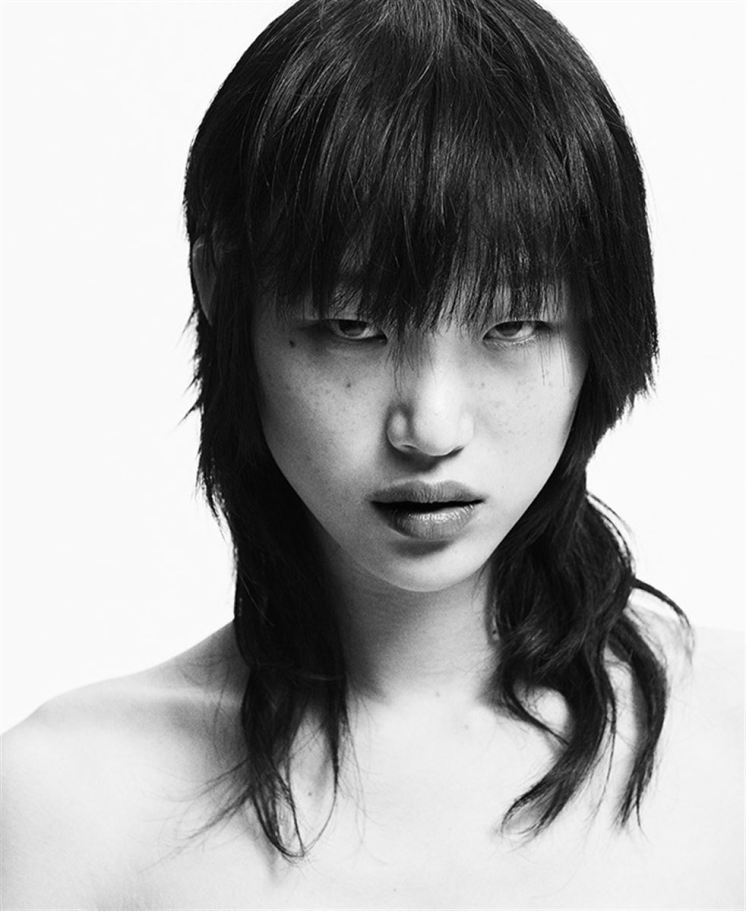 What really sold Sora Choi for me was her eyes. Her monolid is perfect. Her gaze is piercing and intense, just like I wanted. I also liked how, with bangs like Cho’s, and when her eyebrows aren’t filled in, the sparseness of them gives her expression extreme ambiguity, which in of itself makes her seem a bit otherworldly. I’m not saying that it wouldn’t surprise me if Sora Choi turned out to be some manner of elf or siren, but, I mean, if she was singing on a rock I would Olympic-style swan dive out of my boat to get there.

Cho enjoys sweet tea and weed, which we all know are not conducive to the pencil-thin figure Sora Choi, as a supermodel, enjoys. Once more, there’s a Korean model that comes to the rescue.

Her name is Geeyang Kim, and she’s Korea’s first plus-size model. This is pretty much a humongous deal, but that’s neither here nor there. If you can imagine Sora Choi’s features and intense expression on a body like Geeyang Kim’s, well, that’s pretty much as Cho as you’re going to get. Cho also has a big butt; I trust your imaginations can fill that particular detail in.

For me, the visualization of a character is kind of synergistic now; an image can inspire, but more often than not, I have a pretty solid idea of the important features and impressions that character has before I go hunting for real-world matches. The pictures are mostly for my free time, when I draw the characters.

I’d like to ask other authors: do you do the same thing? How important is a pictorial representation of your character to your writing process? Do you do it just for fun? And, like me with my obvious bias for Large Boys and Chubby Ladies, do you have any particular type you keep returning to? Let me know!