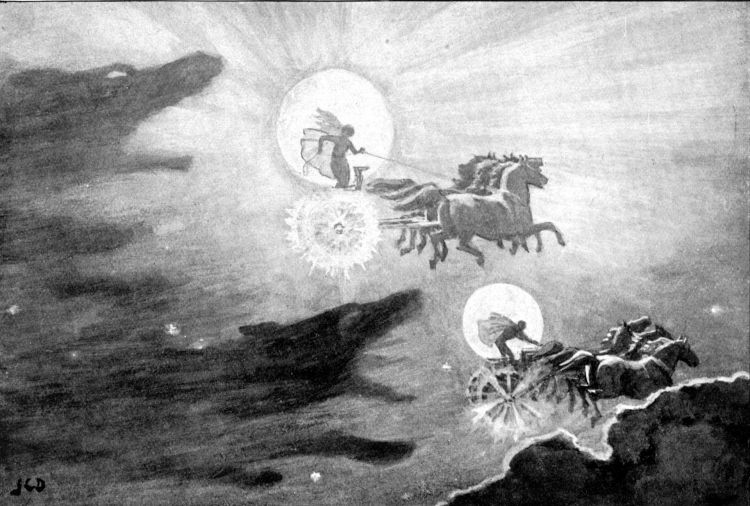 The horses of heaven never grew tired, but Sol still dreaded the time when they would slow. When stardust or some evil charm would catch a leg and snap the bone, and her chariot would slow, and Skoll would be upon her.

“I am alone,” cried she, day after day, as the branches spread beneath her, streaming past forevermore.

Where was her father, her mother? Where were the Aesir? In their fine houses and high walls, safe from the wolves, while she drove Arvakr and Alsvithr onward toward desolation. Her tears evaporated in the heat of the sun which so burdened them, their sweat turning into steam.

“Consider, dear one,” Skoll would answer. “If you were mine you would never be alone.”

“Be silent, hateful one,” she told him every time. “Be silent, Liesmith’s son, I will not listen to you. If I stop, you will devour the sun and the worlds will die.”

Ahead, Sol spied her brother, pursued by the First Son of the Great Wolf as she was pursued by Skoll. Did he ask for this? Was it a burden he took willingly after she was shackled to the chariot by the hands of the Aesir?

Or did he see what they did to her, the dark fate of his sister, and know there could be no choice? Oh, her father! Oh, her mother! To have both their children snatched up by the Aesir to ride forever to their own deaths, with no hope of salvation… there were crueler fates bestowed by the ones who rule from high walls, but not, in Sol’s recollection, to less deserving creatures. Her parents were haughty, true, but so too were the gods.

How many years had passed? For all that men relied on her, she could not tell the time herself, so absorbed in the eternal chase. How many times had she passed above them? Did her parents still live, or did their bones sleep beneath the fields?

“I will take you to my house among the Roots. It is better than any house in Asgard or Midgard, the house my grandfather Loki built for me. I will array you in fur and bone and mud and the blood of the fallen. I will feed you the elk that sip dew from the leaves of the World Ash, and teach you the language of beasts and jotnar.

“You will never drive a chariot again. You will be wild and beautiful. Our children will be the new stars and the dogs of the wars to come. Oh, dear one, stop your chariot!”

Year after year, with the wolf’s breath blowing over her, and his hot spittle dripping on her neck, she raced, driving the horses at a gallop that would last until Ragnarok.

“Do you think, dear one,” Skoll asked one day, as the worlds spread beneath them and the stardust was thick, “that without me, the horses would run?”

“You are just trying to confuse me,” Sol dismissed. “Be silent, hateful one, be silent!”

“Is it I who drive the horses? Were you only put there to direct the chase?”

“Horses are not always wise. They must be driven by men. Without me, they would stop and you would eat them.”

“Without me, there would be no reason for the sun chariot to move at all.” The wolf laughed. “It seems we have had our first child already, dear one.”

“Our lovely first child,” Skoll howled to the stars, to the distant branches he and his quarry were forever banished from.

His jaws split wider and wider, a gulf vast enough to swallow Sol–chariot, sun, horses and all–in one bite. So big she could not reach from the top of his gullet to the bottom, even if she had stopped and stretched. Yellow teeth glinted like small suns in their own right.

Skoll’s laugh shook the World Ash’s branches, shook the stars themselves. Even Hati and Mani looked back over their shoulders to see what was happening, though they slowed not for a second.

His eye was as massive as a sea, and Sol saw herself reflected in it. Was this her? Burnt beyond recognition, a cadaver more than a woman. The gods had not given her iron bellows to keep her cool. When had it gotten so bad? Had she always looked this way?

Below, a horn sounded.

Then, Skoll was a wolf once more, and leapt, and he was in the chariot.